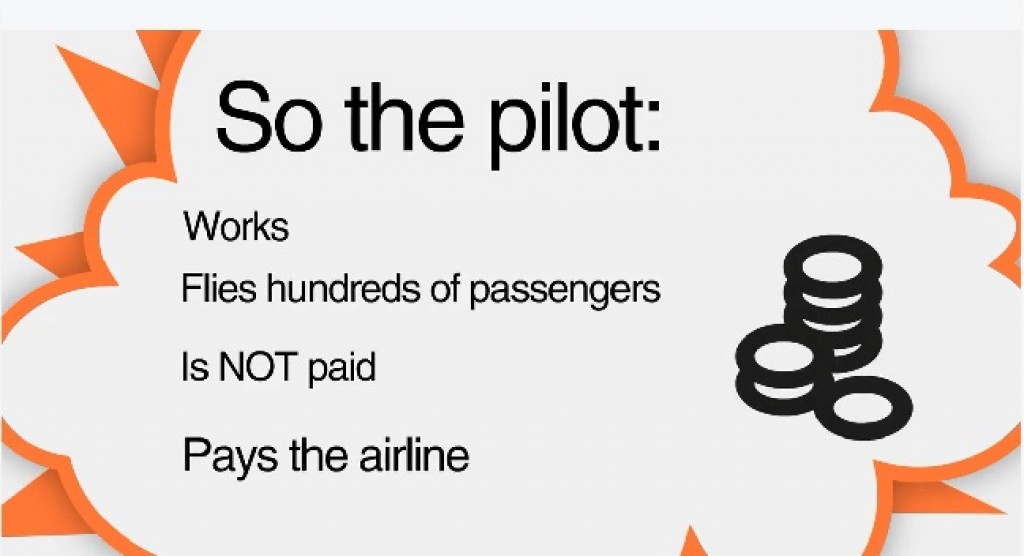 “Airlines are constantly reinventing models to get cheaper labour, like hiring self-employed or fake self-employed pilots, pilots on temporary work agency contracts, or on zero-hours contracts,” says ECA President Dirk Polloczek. “But P2F takes such unacceptable practices to a wholly different level: the employment of young pilots is no longer an investment by the airline in its staff but a simple revenue generator. It is a blunt abuse and exploitation of young, low-hours pilots who are desperate to find a job.”

“This is why young pilots have said “enough is enough” and started a “Stop P2F” petition,” continues Dirk Polloczek. “Europe’s entire pilot community stands firmly behind them, and urges European decision-makers and the European Aviation Safety Agency EASA to take decisive and effective steps to ban P2F schemes and to stop this abuse.”

“P2F practices discourage young motivated men and women to join the profession, or – once they did their initial pilot training – pushes them into financial exploitation, by making them pay 30-50.000 euro for a P2F contract, on top of the already high costs of their initial training,” says Philip von Schöppenthau, ECA Secretary General. “In addition, P2F provides a perverse incentive for a pilot to fly at any cost. Few will admit it, but when you have paid up to 50.000 euro to fly this plane, you will think twice before deciding not to fly today because you feel sick or fatigued. Like any other pilot, young pilots must focus on the task and prioritise safety, rather than having to worry about the financial and career consequences of taking safety-related decisions.”

With only few jobs on offer, pilots who do not have much flying experience (usually under 1500 h) are caught up in a ‘catch 22’ situation: insufficient flying hours to get a job means they have no chance of getting one; and without a job there is no way to build up the required experience to be hired. P2F schemes exploit and exacerbate this situation by making pilots actually pay the airline to work and fly for it on regular revenue-earning flights. Concretely this means in addition to the 70.000-130.000 euro debt in the bank at the start of their career, they usually have no prospect whatsoever that the company will hire them after their P2F contract ends.

In a recent report on ‘Atypical forms of employment in aviation’, carried out by the Ghent University (Belgium), the researchers identify P2F schemes as one of the most extreme and exploitative forms of pilot employment, and recommend that they are banned. This comes in addition to a new trend towards (bogus) self-employment of pilots, temporary agency work and zero-hours contracts where pilots are paid by the hour flown.

ECA position_Pay to Fly in Pilots